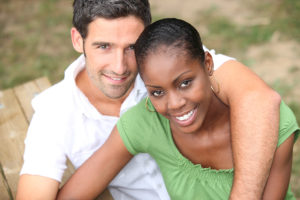 International dating is something which not everyone can try to get into. Some people have a tendency to have a relationship with the same country citizens while others prefer to mix up a bit and look for a love abroad. Dating Malaysian woman, Black woman or even Russian one has its own rules and quirks which you shall remember. There are many ups and downs while interracial dating and somethings which only specific ethnic group might understand.

As for black girls dating white guys, it seems it’s a new topic along international couples.  This model of the relationship wasn’t that commonly known before. If you are the Black girl who is hanging out with white guys, for sure you will feel familiar with statements listed below.

1.Your worries about his family being racists are real like never before. You might be scared to meet your future in-laws just because of your skin color. Even though your boyfriend told you that his folks are cool, you still have that nervous feeling inside.

2.People will stare at you on the street especially while holding hands and show affection in public. Especially old people will do like this. Why?  Because in their time’s people didn’t mix up with another race.

3.People will assume that since your boy is white, you are into Western guys only. This goes to both white people and black ones. Be ready that your African friends might judge you and feel jealous somehow.

4.You will be wondering what people think about your boyfriend dating you(as a black chick). Are they judging him or are they trying to force him to call it quit because of your skin color?

5.You will think what his friends and relatives are thinking about you. Is there a way to be in good relations with them or you can forget about them being friendly towards you.

6.Your guy will be curious about African hair style. Probably he will try to touch or play with your hair as many times as possible. Let him do it.

7.Your boyfriend might hide a relationship with you for a while until get sure that his relatives are going to accept you.

8.He will be super nervous to introduce you to his parents and friends.

9.Be ready that his friends might say a slightly no funny racist’s jokes about your skin tone.

10.You will have to get into multiple conversations about skin tones and race issues.

11.Sometimes you might have a feeling that there’s a huge and visible border between you and the white guy you are dating. Sometimes western people have a tendency to show off power because they are white.

12.You boy won’t use the word “Nigga” personally towards you but might use it towards other African citizens.

Even though dating western guys as a black woman might be hard at first, definitely it’s worth it. International relationships are pretty itself and give a great time while hanging out together. They are worth full effort and sacrifice. Do not be afraid to date western guys.